I was bored after coming from work, I wished to refresh my mind so that I can do some work so I downloaded a game called Bridge construction from Google play. At first I though the game would be easy and it was easy in the beginning. But then I started realizing about what can I learn from the game. As within a limited budget I had to construct a bridge. Also using the limited type of material. So I really gave a thought. I started thinking about how can I construct a best possible bridge, should I use a truss or suspend it using a cable. I started making influence line diagram to find out the relative maximum force that can possible act in certain region of bridge. It was fun and a good learning experience.

Let me share some of the thoughts that I gave on the application. 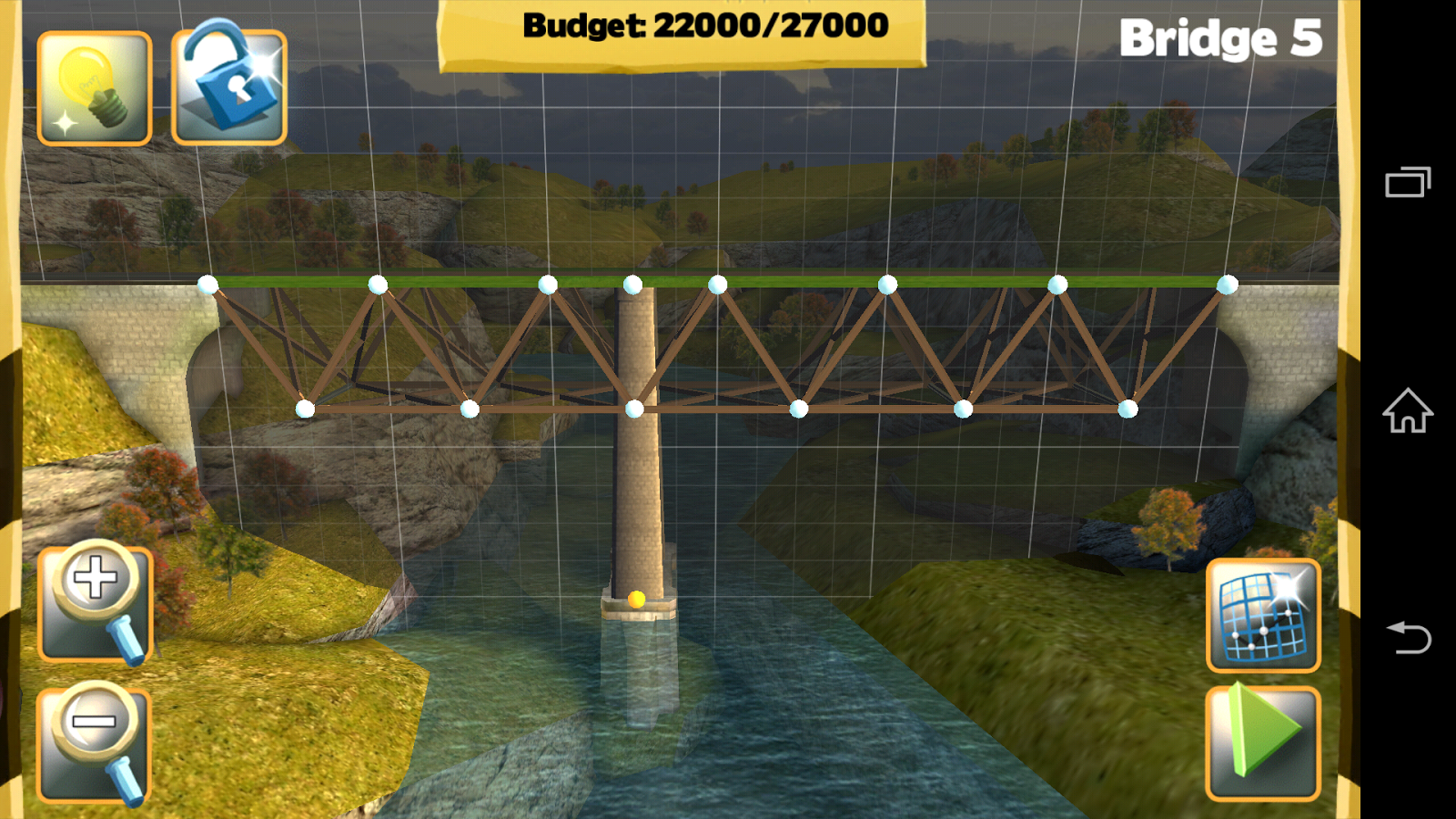 In the structure above, I need to cover the total valley length of 60m and I was allowed to use concrete and wood with a support at 25m from one side. I just erected a concrete column at the assigned place and then simply made the truss. This was not challenging as well as I didn't have to give much of a thought. 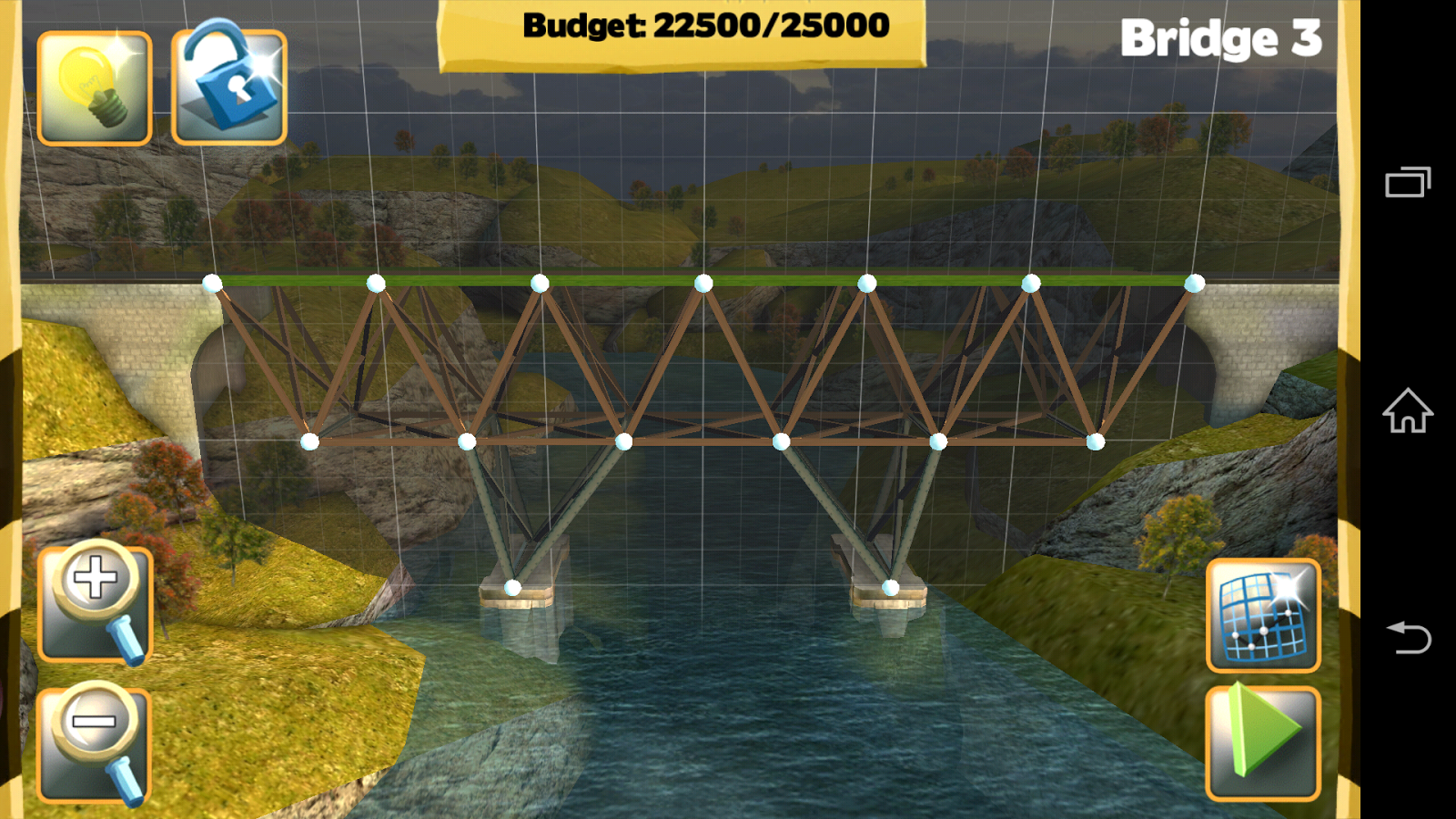 In the picture above I had to cover a span of 60m again but this time I had 2 supports both located at 18m from each end. I was allowed to use iron as well as wood. You can see that I used iron in the bottom and wood at the top. I thought of the higher stress concentrations near the support and so used iron and wooden truss was good enough to share the load. So again it was easy but if you are learning basic concepts of engineering it will help you to give a thought. 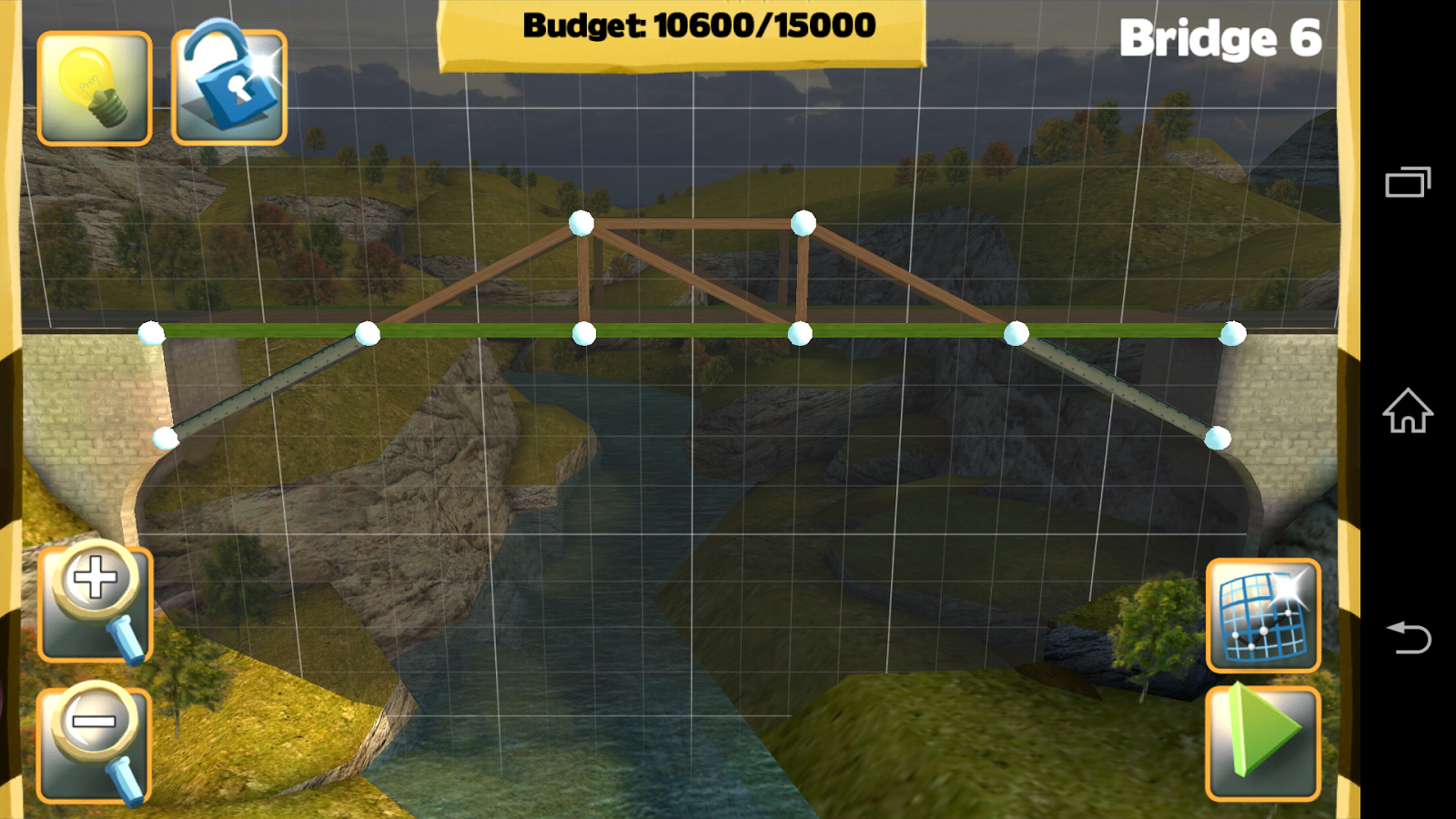 Now, in the above picture I had to cover a span of 50m without any intermediate support. At first I drew a simple truss but it was not so efficient and I eventually used all my money. But then using ILD (Influence line diagram), I gave a thought about maximum stress concentrations and so used the iron bar at the end. Now over here, this particular configuration helped me a lot in saving material. The wooden truss at the top directly transmits the load straight to the iron bar without changing the direction. This reduces the secondary stresses in wood frame and the load path is very uniform. Thus helping in material saving.

Now, all these were just wood and iron and concrete. Now suppose if I tell you to use cable in bridge, where will you use? To suspend the bridge right? At first I also did the same thing. But wait..!! I wasn't successful. Then a word "Tensegrity" popped up in my mind. What is tensegrity? Tensegrity is a structural principle based on the use of isolated components in compression inside a net of continuous tension, in such a way that usually the compression members do not touch each other and the pretensioned system (Cable or tendons) delineate the system spatially. Let me show you a picture of tensegritic structure. 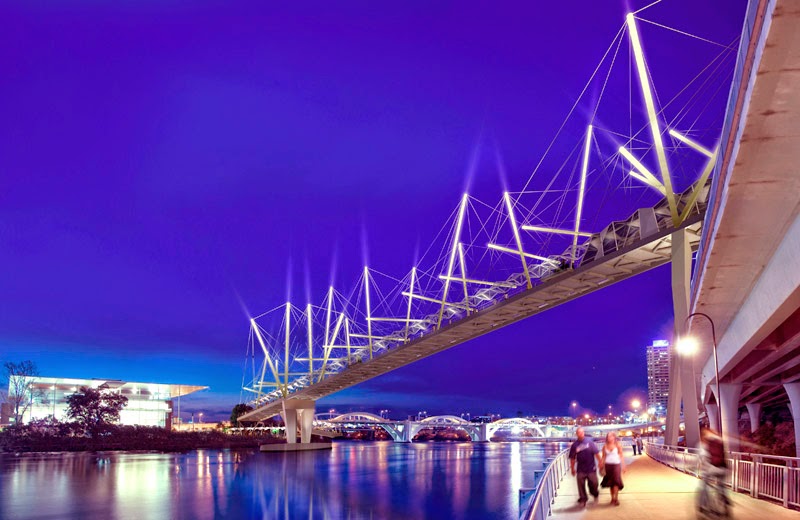 You can see how the bridge carries all the tension load using the cable and the compression using cylindrical member.

Now, I thought why shouldn't I try using the concept. I replaced all the tension members in the truss with the cable and tada..!! The weight of the bridge reduced drastically, I saved a lot of money and it was stiff enough to carry the load of the trucks. 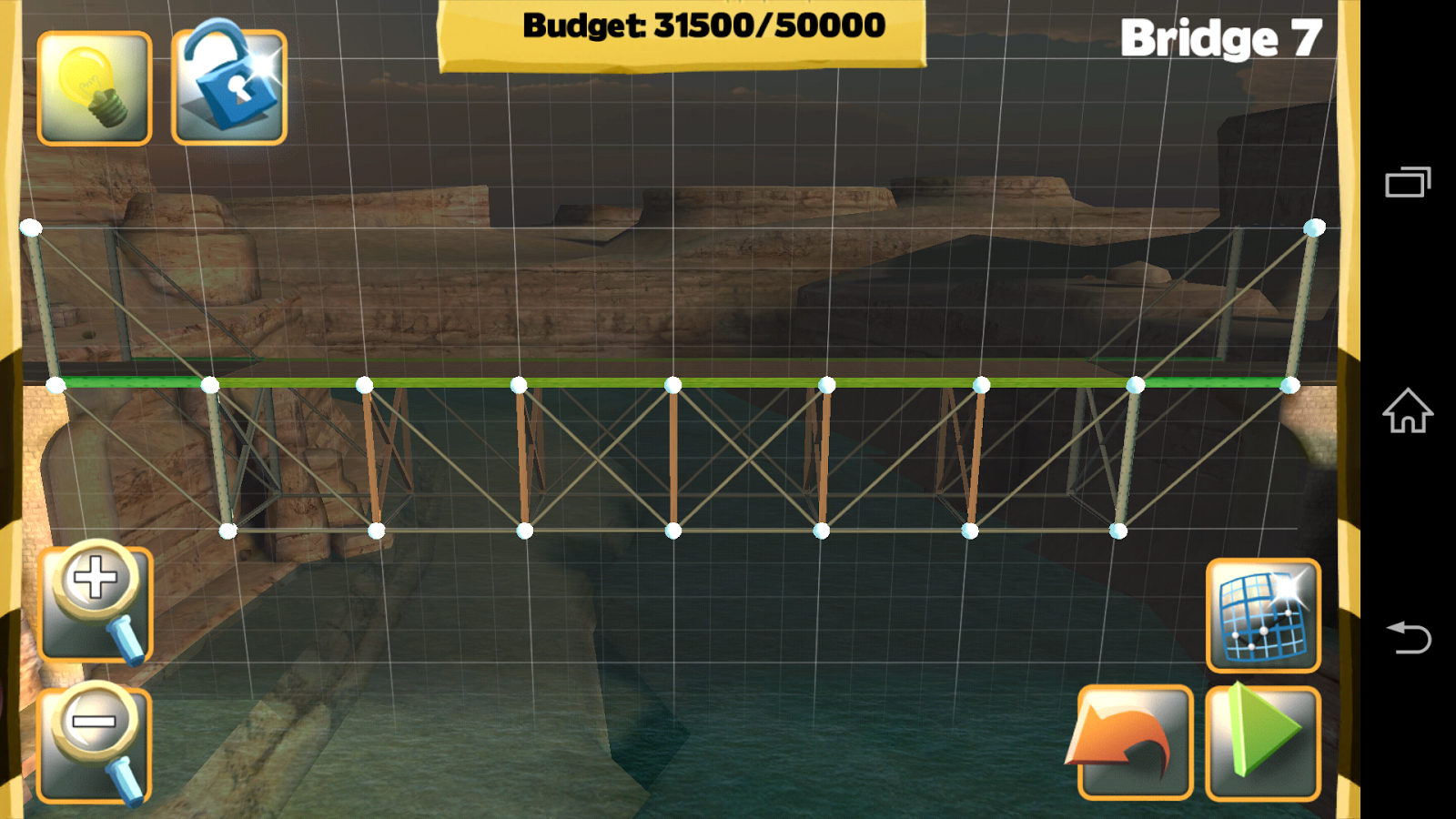 Check the inclined members too which are replace by the cable in the bridge. 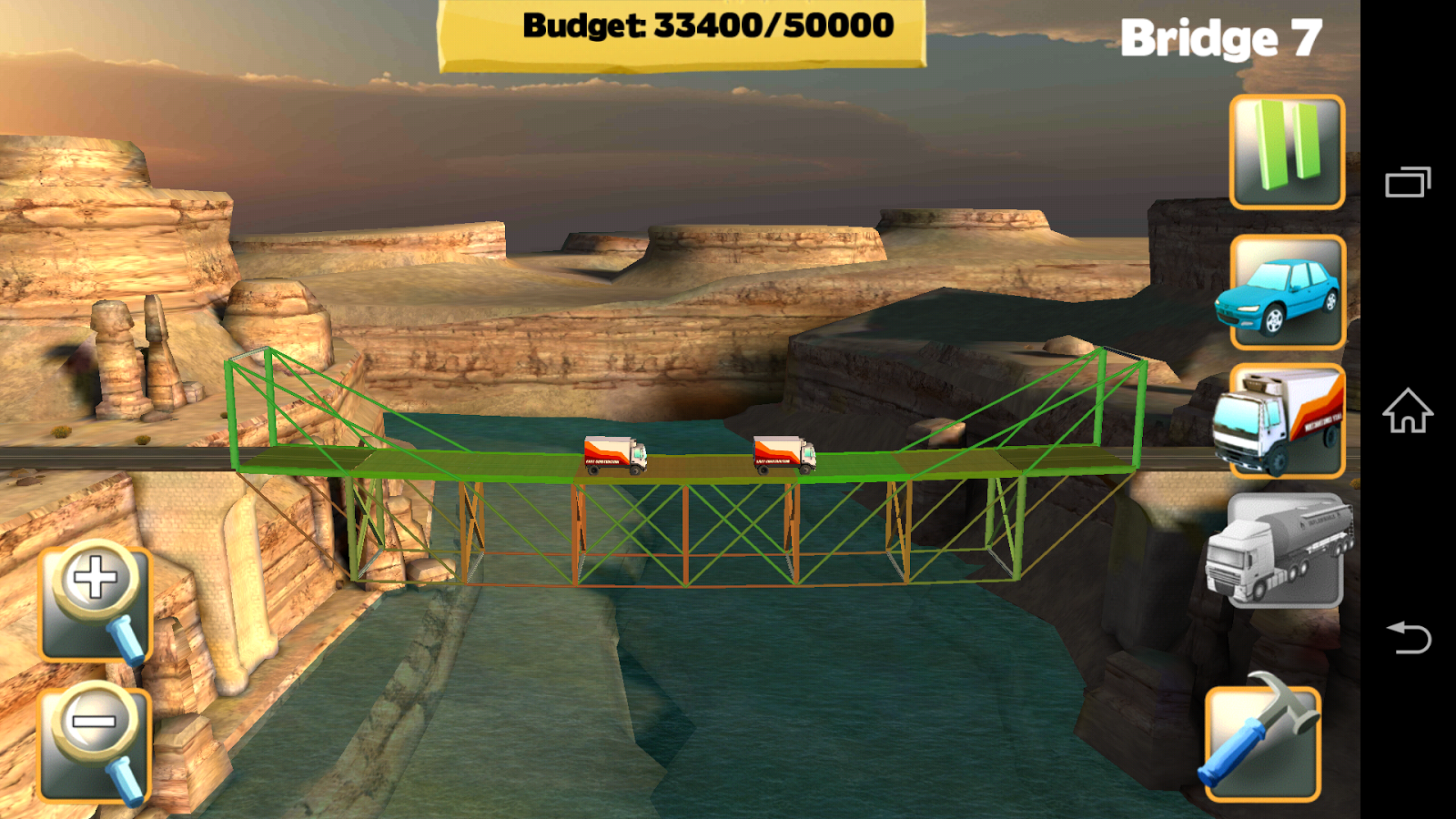 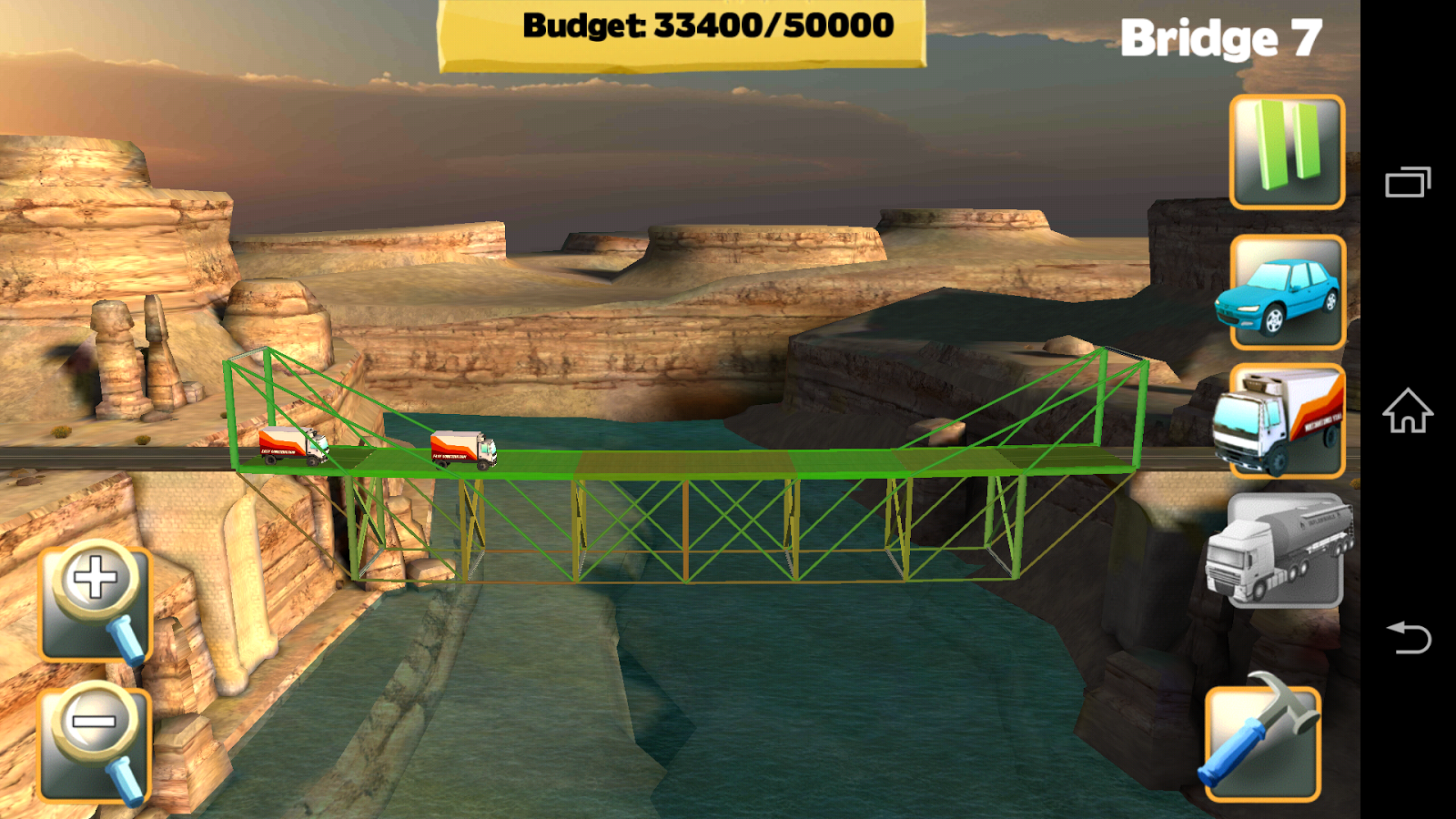 (Now you should ask yourself as why did I use the cables in inclined direction in bridge 7 and I didn't do the same thing in bridge 8? Find out the answer as it is interesting. Hint: Use a beam analogy and shear force to find the answer.)

I hope this is called madness as how our crazy mind can think of such good ideas in a game. Let's hope we come up with a real life design with such a concept which can resist earthquake as well as wind loads. Afterall it is all about the shape that you give to your structure and the way you analyze it.

Have a good day all.

Carry on the madness