By Jinal Doshi February 06, 2016
Every time an earthquake strikes, we learn something new from it. As a structural engineer it is always difficult to explain people as why a building collapsed. The only reason is we cannot predict earthquakes. But wait I am not done here, yet..!! Let us take a deep breath and jump into the possibilities of failure of buildings in the city of Tainan which is located just at a distance of 48km (30 miles) from the epicenter. Let us take a look at USGS map of the affected zone. 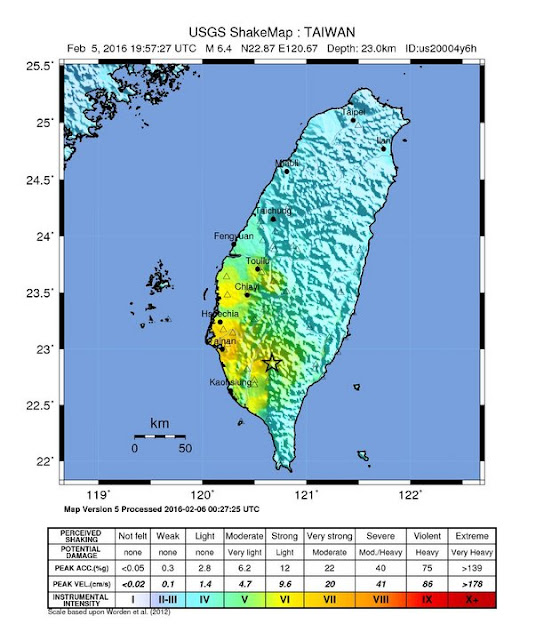 Talking about the building collapses in Tainan, we cannot directly blame at design engineers and the only reason I am saying this is because Taiwan has been famous for earthquakes and not small intensity but the large intensity ones. Earthquakes between the range of 5.5 to 7.7 have been pretty frequent in this part of the world. They are designing the buildings on the basis of response spectrum method which, as far as I know, is also included in their design codes and was revised in 2011. 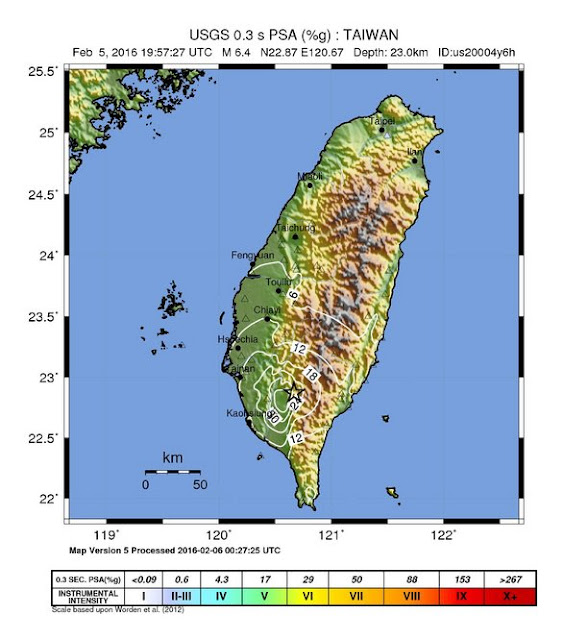 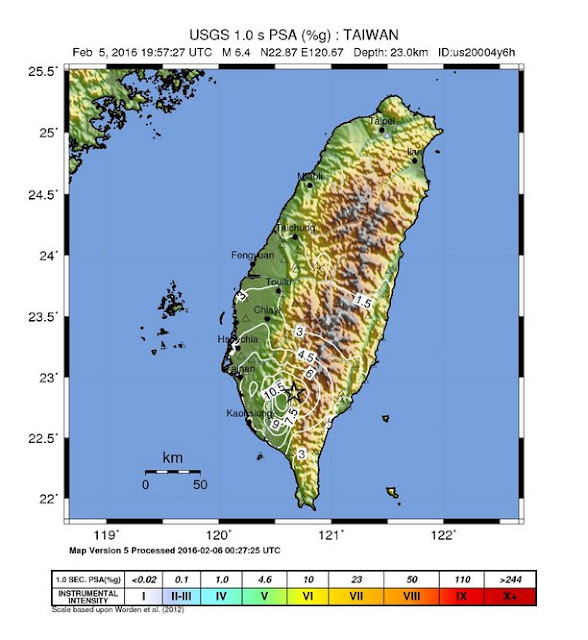 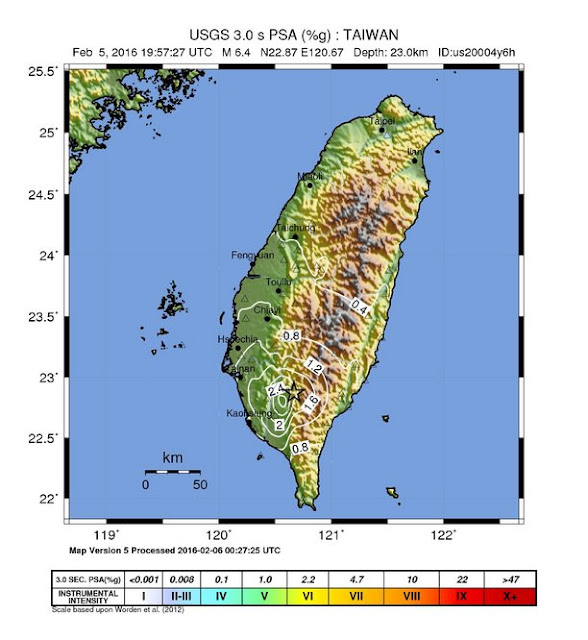 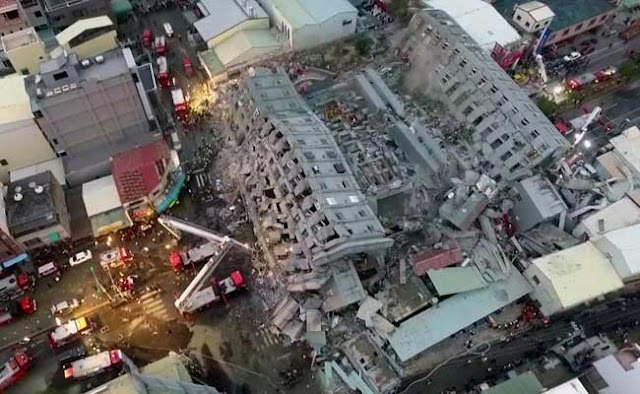 Yes, the building toppled over aka overturning. This seems bit unusual to me as there are very few reasons for such a failure to happen. The building has remained intact even after falling on the ground, the only failure that I can see in the images is near the base where bars have been pulled off from the concrete pointing towards insufficient development lengths but we cannot blame a bar splice for a building failure because the failure is overturning and not a local failure.

Overturning points us to a reason that the axial forces were not predicted to this extent which points to drifts of the building and which in turn points to amount of base shear a building is experiencing. Overturning also points to the effects of P-Delta effects and let me share an image showing a similar failure which occurred in Northridge earthquake. 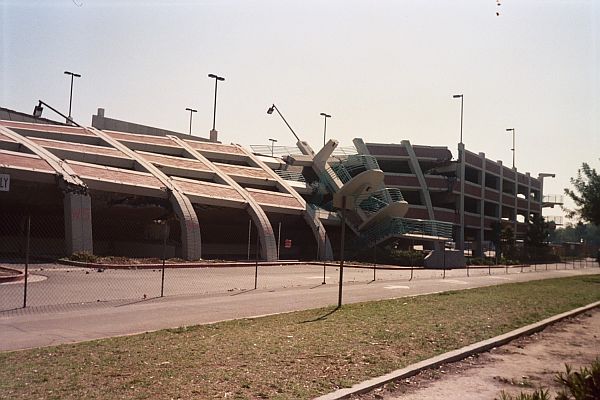 This failure shows the effect of P-delta in columns. In this case it was just a 3 story parking structure and in case of the overturning of a building it was a 17 story structure. Now I am just guessing as what might have happened because I do not know what the lateral load resisting system of the structure but it should be concrete shear wall and I also don't know what the design spectrum would have looked like. But I do know for sure, if we just do response spectrum analysis then we surely do not see P-delta effects on structural instability. But there is also one more research showing that the effect of P-Delta in a stiff system like core walls is not so prominent. So yes it is very early to predict as what might have happened but we can at least narrow down to few reasons to what might have happened.

One more unusual thing that happened is the collapse of multistory buildings. Now building of heights around 20-30 feet were not collapsed and instead all the tall building has collapsed which gives one more sign of earthquake and that is low frequency waves. A taller building has bigger time period and a lower frequency while a shorter building is exactly the opposite. Thus a low frequency wave can create a sort of resonating effect which pumps more and more energy into the building while a shorter building is doing all okay. This makes taller building to fall and crumble as it cannot resist the rate at which the earthquake energy is entering into the system. Let me give you an example of resonance:

Let us look at another building which failed: 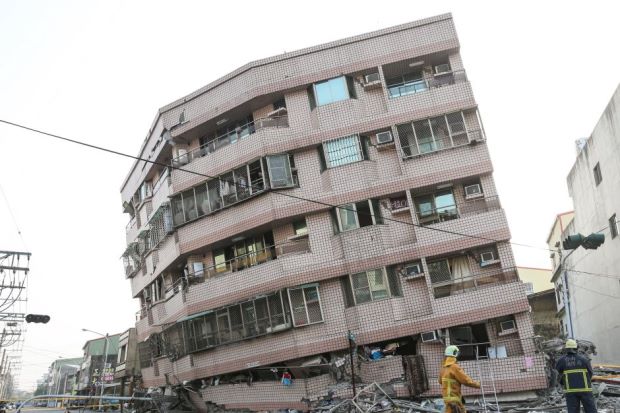 This shows shear failure in columns of the structure.

Now, as USGS explained that as it was a shallow earthquake, the intensity of the earthquake might have magnified and it created more damage that expected but why just multistory buildings and not small structures? For that we will have to wait but we know that it has to do with the Tainan basin which might be a softer basin as it is a separate basin against the rest of the Taiwan.

We hope that all the people have been rescued and are safe now. We will get into more depth as soon as we get some more evidences and more accurate data.