Charlie Chaplin and his buckled stick

Charlie Chaplin, one of the most famous character in the history and you will always find him with his stick. But wait, have you ever seen his stick when he rests on it? 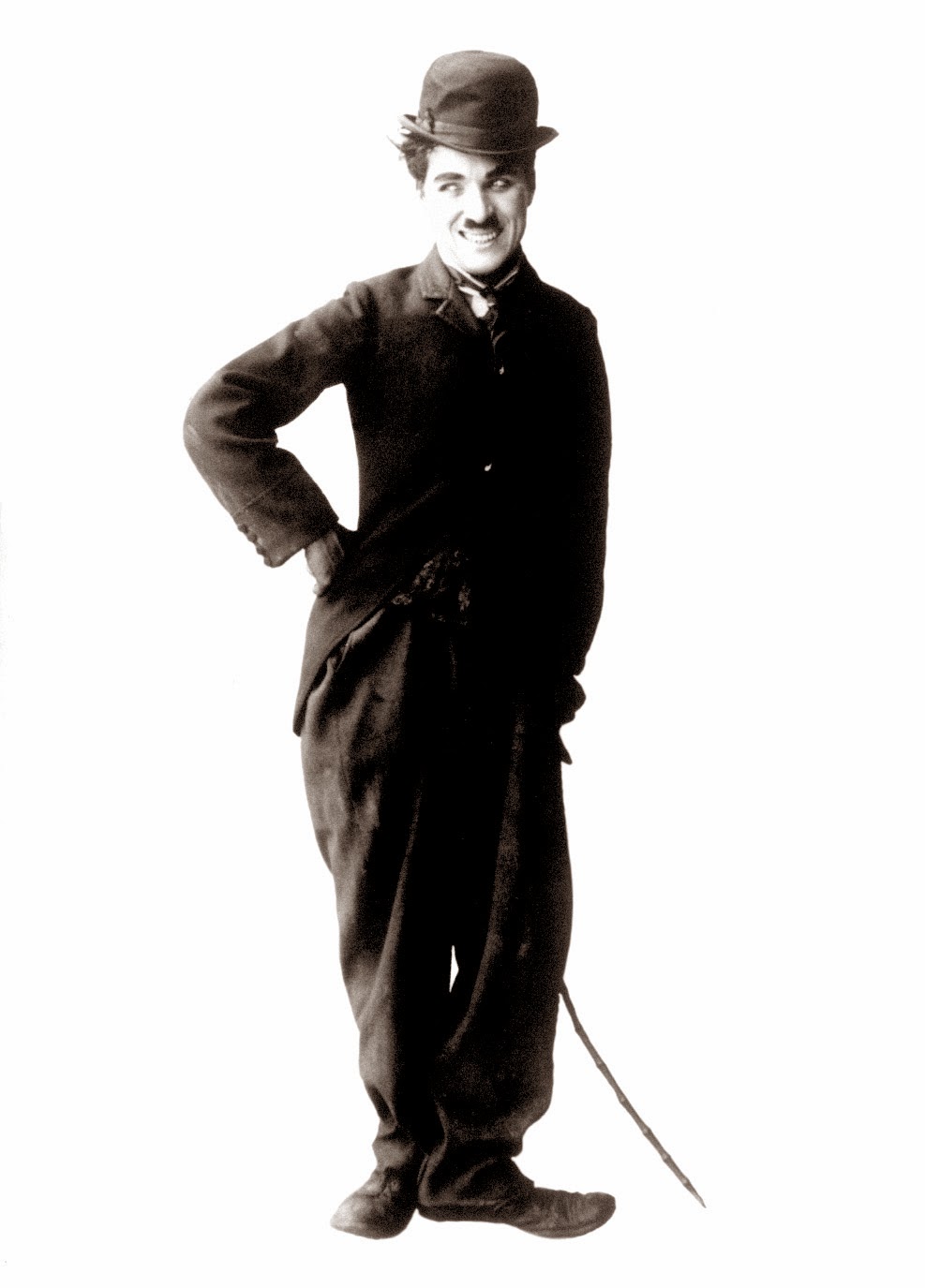 The stick in the picture above describes one of the most fundamental characteristic of a column in the field of structural engineering, called "Buckling of Column". But why did it buckle? What made the stick to bend instead of taking the load straight down the ground? Well, here we are to discuss about the event.

Buckling is called an instability occurred in a structure because of excessive loading. In 1757, mathematician Leonhard Euler derived a formula for calculating the maximum load carried by a slender column. But what do we mean by slender? When the longitudinal dimensions of the member are much greater than the cross section of the member then it is called a slender member and remember you should use the word slender while describing the compression in column not when there is any tension.

The equation above describes the slenderness ratio, and the limit of slenderness of column varies as the material changes. For example, steel column is said to be short if the slenderness ratio is less than 50, it is called an intermediate column if it is between 50 and 200 and it is called a long column if it is greater than 200. Long columns are very susceptible to elasticity. The term Leff  is called as effective length of the column which depends on the end conditions of the column support.

In this article we will focus on steel columns, why? Because the strength of steel is very high which leads to smaller cross sectional area of a member to resist a particular force as compared to concrete. So that problem of buckling generally arises in steel columns. 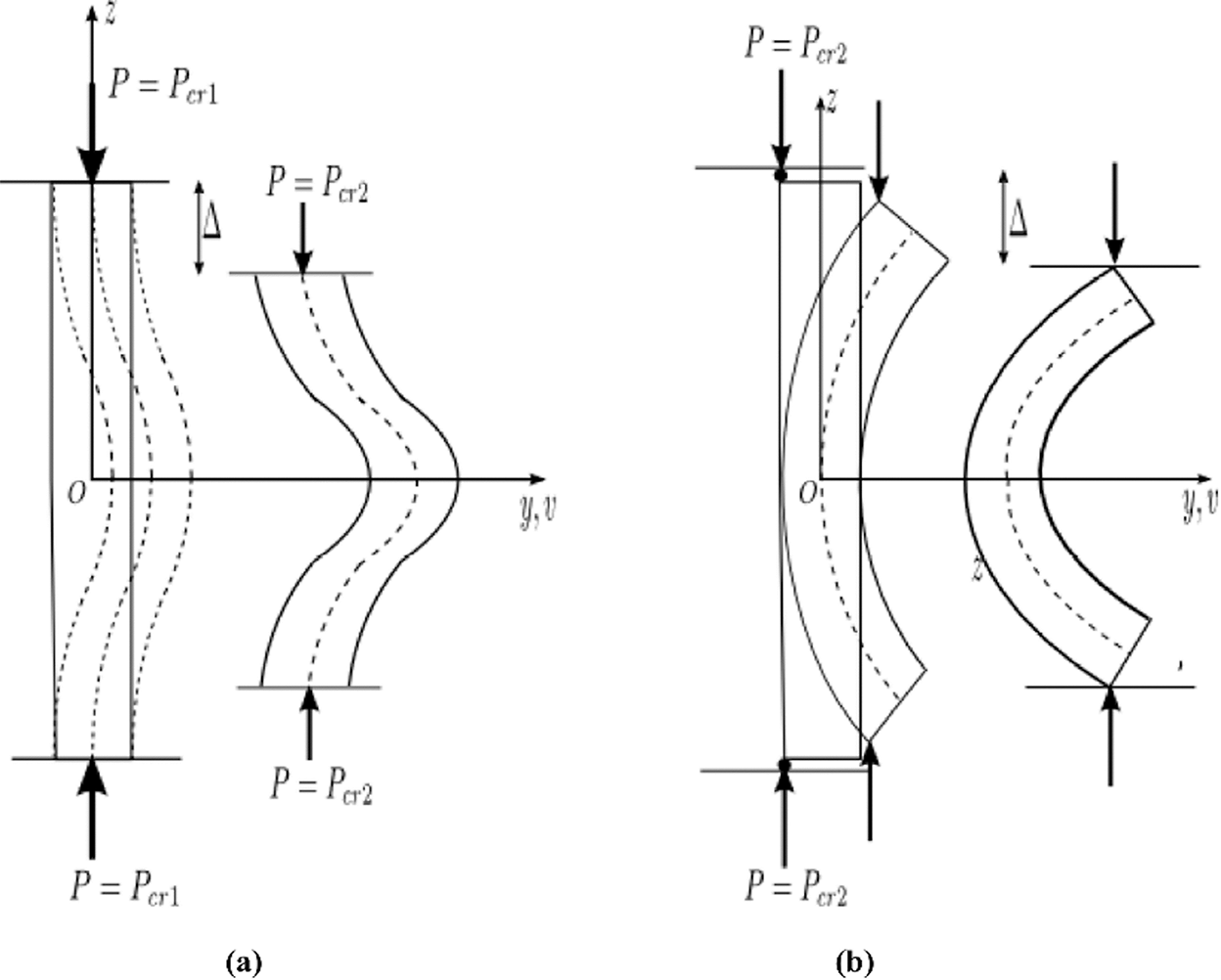 The picture above shows the buckling of a simply supported column. Load P is applied on the column and from it's straight configuration it moved to a buckled configuration. Now, why did it move? Because till now we have learnt that the axial forces directly transfers the force without any instability. Here's the answer.

Every system in the universe has got different stages of equilibrium and the system will get deformed at the minimum possible load. Consider the system shown in figure above. We assume here that the deflections in the system are very small, that is the column has slightly buckled. Now if you take the equilibrium of the buckled shape of the column you will find that the load required to buckle the column is less that the load that can be actually carried by the full cross sectional area.

Moment is equal to the stiffness of the member times the modulus of elasticity times the curvature. where curvature is given by,

Now, the moment is also equal to the load applied times the deflection at the center of the column due to buckling, which is the acting moment,

Thus when you equate the acting and the reacting, that is the work done by the load and the strain energy stored in the member and solve it you will get the Euler's formula which can be written as below.

Here n defines the mode shape of the column. Mode shape is the shape of the deformed structure. You will also find that the minimum value of P is when n =1. This share corresponds to the one which was shown in the figure above. The clear picture of mode shape is described in the picture below. 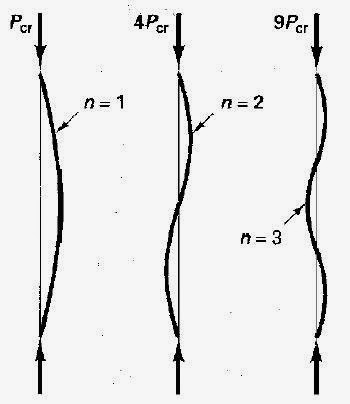 Now let's clear up one more concept of column buckling. Take a scale (ruler) and press it from both sides. Do it for 3-4 times. Noticed anything. Yes the scale (ruler) was always buckling in the direction perpendicular to the broad face. Yes, in the Euler's formula the value of moment inertia is the lowest value. That is the smaller of the two moment inertias that are present for any cross section. If you take a rectangular section than the column will always buckle in the direction perpendicular to the broad face because the moment of Inertia will always be less in that direction. But if you take a square column the chances of buckling of column is same in both directions. That's is the column will get confused in which direction to buckle. This results in slightly higher load capacity of a square column.

The case above was for pinned column, what about the other cases with fixed supports, fixed-pinned support, cantilever support? Well my work was to put forward the concept of buckling of column. I will now directly provide you with the results of the rest cases. 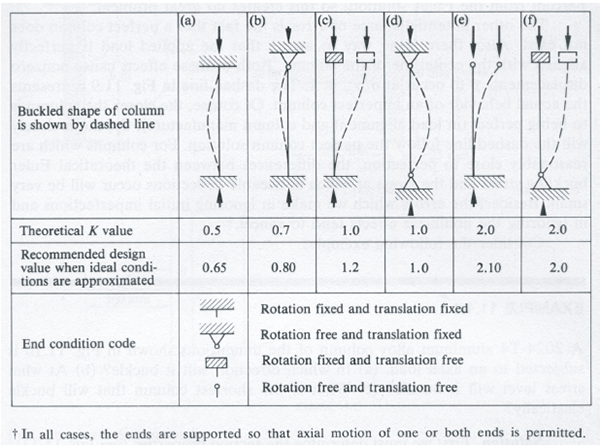 The picture above describes the buckling load in various cases, but what is effective length. Well, in simple works effective length is the length of the column between points of zero moments. In case 1, it is pinned support so the distance between point of zero moments will definitely be L. In case 2, the column is fixed-fixed, so the point of zero moments will be at a distance of L/2, that is the point from where the curvature of the the column changes. You just need to replace the value of L in the Euler's formula with the value of effective L and you will get the modified value. I would recommend everyone to once go through the calculations behind this.

Now, here is a loop hole. Euler's formula shows that the column will break when the load is reached the value of critical load, but when Charlie Chaplin rested on the stick, the stick buckled and it did not break. Why is it so? Isn't that strange. Well, we assumed that the deformations are small and neglected the denominator of the curvature equation. This results in the fact that we come up with a result that can give the buckling load but not the profile of the buckled column. And so we can't say whether the column will survive the effect or not. Then you might think how to find out the answer about the Charlie Chaplin case.

The answer is using the theory of Elastica. Here, we consider the higher order of differential equations and work on it. On doing so we can actually find out the profile of the buckled column at a particular load. This theory of elastica enables us to answer the stability of the buckled stick of Charlie Chaplin. When we calculate using the theory of Elastica we can find that the column still can carry 15-20% more loads which means that the buckled column requires nearly 1.2P load to fail it completely. This is the answer to our today's interesting question.

I hope you enjoyed today's blog. Your questions are always welcome.

Have a nice day.