Why does a beam bend? Have you ever asked this question to yourself? Did you get any answer? I know that it's difficult to find an answer about this phenomena. But let me try to explain this to you. 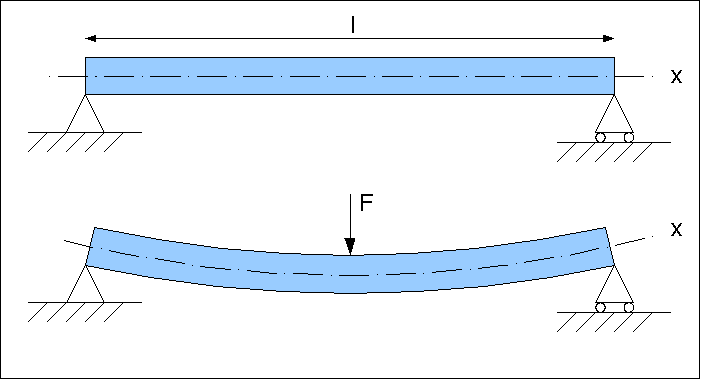 Consider a free falling I section from the top of a building. If it falls freely what do you think will happen? It will remain straight because all the particles are moving at the the same velocity at a particular instant of time and the acceleration is equal to the gravitational acceleration. Here I am considering the case of vacuum or else air resistance will induce some external forces. But now consider that the beam is supported at two ends. What will happen? The thing is, the particles which do not have direct support experience the gravitational force and they will try to move down. But the particles who have direct support beneath them, they will not move, they are reluctant. This thing causes internal forces and the two supported ends because of the strength of material resist the unsupported span of the beam from falling down. This is why a beam bends. See, it was not at all difficult to understand the phenomena. I know that most of the books do not explain this and so I used Newtonian mechanics to explain the phenomena.

Now we all know that why the beam is bending. But what are the forces in it? Bending induces stresses like bending stress and shear stress. The corresponding force diagram that you make is the bending moment diagram and the shear force diagram. But the confusion is how are the internal forces developed in the beam? When a beam is loaded then it bends. Take a look at the picture above. This bending causes the top fiber to reduce it's length while the bottom fiber expands. The neutral axis remains the same. By saying that the top fiber is compressed, I mean that compressive strain is generated in the body, now we all know that if the strain is generated then stress are the obvious if the member feels resistance. This cause the compressive forces in the top of the beam while tensile forces in the bottom.

You can see in the picture above that the tension and compression are equal in magnitude but opposite in direction. This shows that even though tension and compression is induced, the horizontal force along the length of the beam remains zero. But the compressive force in the top fiber and the tensile force in the bottom fibers create a couple about the neutral axis and when any of the single force is multiplied by the distance between the center of gravity of the two forces, you will get the moment. This is how the bending moment is resisted by the beam.
Bending Moment = Force (Tension or Compression) * Lever arm 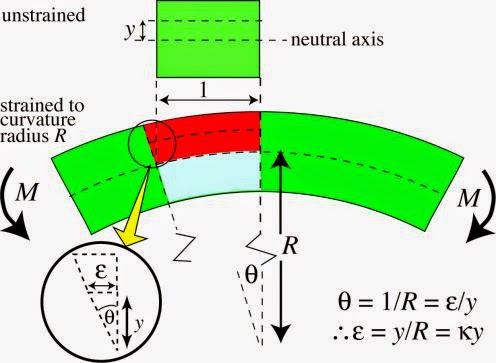 Apart from that the picture shows that the compressive or the tensile forces are not uniform across the cross section of the beam. Well, this is because the strains are neither constant throughout the section. I already mentioned before that at the top there is a compressive strain, at the bottom tensile strain and at the center no strain (Neutral axis). Now if we talk about the elastic bending, strain is proportional to strain. And if you see the cross section of the beam, the strain will uniformly reduce from maximum value to zero. This is the reason of the triangular compressive stress.

The picture above shows an additional force called shear. How can it be induced in the beam? Till now you saw that the beam was resisting bending moment, but what about the vertical force? If you draw a free body diagram of the beam you will see that the moments are transferred to the ends but the vertical force is not yet transferred. This vertical force should be transferred to the supports in order to do that an additional force is induced in the beam and it is called shear force. This shear force actually shears of the beam (Just like you shear apart of butter using a knife). This is also important, because if the beam is not designed to resist the shear force then it will fail.

Now, here I am not going to talk about how to draw a shear force diagram or a bending moment diagram. For that you can probably refer to any strength of materials or mechanics of materials book and learn the mathematics thoroughly.

Now you all know the bending stress diagram in the beam, but the top figure shows the shear stress diagram of the beam. Why is it so? Generally the shear force is resisted by the central part of the beam cross section. When you load a beam what happens is when you move from middle of the beam to left, the bending moment reduces, not this reduction will cause reduced moment of resistance for the beam. This will be reflected in the tension and compression fibers of the beam. This variation in the tension and compression forces cause an unbalanced horizontal force between the section on the left and the middle of the beam. This unbalanced force is maximum at the top fiber and zero at the centroidal axis. Now to calculate the shear stress, when you will go through any book, you will find that the equation goes like:

In the above equation, you can see that the term dA is present, which is picture above. This dA will be zero at the top while it will be maximum at the neutral axis. This causes the graph to have a maximum value at the center while zero at the top and bottom of the cross section. 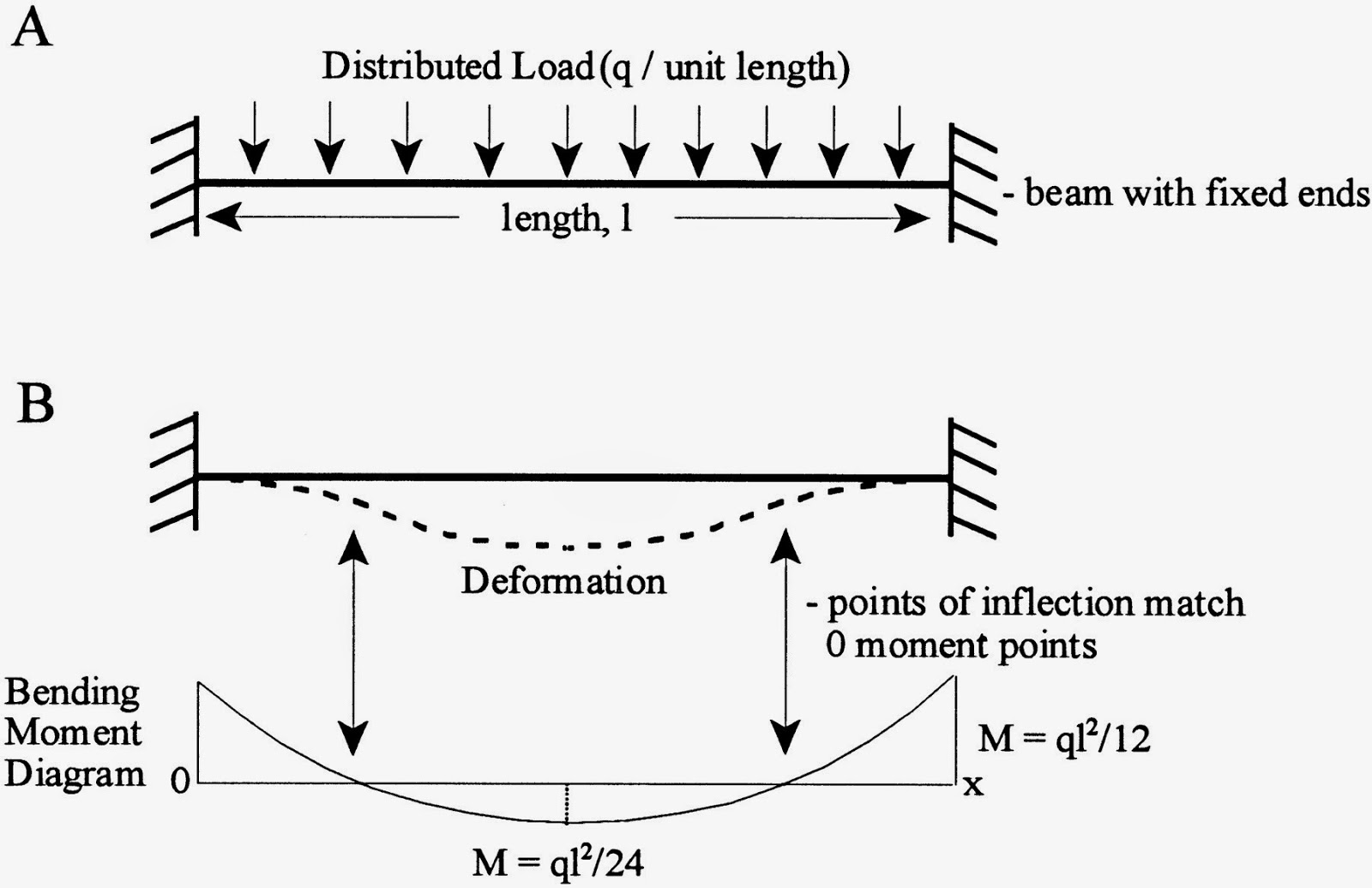 As you can see a beam in the figure above, it is fixed at both ends. Fixity means that it will not allow the beam to rotate freely as in case of hinged supports. This will cause moments at the ends and the beam will now deflect at all at the ends as well as the slope of the deflection curve will be zero. This kind of situation creates a negative moment at the supports. We all know that a normal beam bends and has tension in the bottom fiber while compression in top fiber. But in this case at the ends there will be tension at the top fibre and compression at the bottom fiber. This change from a positive moment to negative moment causes a point of zero moment or point of inflection in the beam. Point of inflection mathematically means the change in slope of a curve from a positive value to a negative value or vice versa. This point is important in designing fixed supported beams or continuous beams.

In our next blog we will talk about designing steel columns. Be prepared with basics.

Till then, have a nice day. Stay tuned.